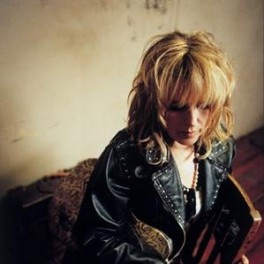 The object of cultish adoration for years, singer/songwriter Lucinda Williams was universally hailed as a major talent by both critics and fellow musicians, but it took quite some time for her to parlay that respect into a measure of attention from the general public. Part of the reason was her legendary perfectionism: Williams released records only infrequently, often taking years to hone both the material and the recordings thereof. Plus, her early catalog was issued on smaller labels that agreed to her insistence on creative control but didn't have the resources or staying power to fully promote her music. Yet her meticulous attention to detail and staunch adherence to her own vision were exactly what helped build her reputation. When Williams was at her best (and she often was), even her simplest songs were rich in literary detail, from her poetic imagery to her flawed, conflicted characters. Her singing voice, whose limitations she readily acknowledged, nonetheless developed into an evocative instrument that seemed entirely appropriate to her material. So if some critics described Williams as "the female Bob Dylan," they may have been oversimplifying things (Townes Van Zandt might be more apt), but the parallels were certainly too strong to ignore.

Williams was born in Lake Charles, LA, on January 26, 1953. Her father was Miller Williams, a literature professor and published poet who passed on not only his love of language, but also of Delta blues and Hank Williams. The family moved frequently, as Miller took teaching posts at colleges around Louisiana, Mississippi, Georgia, Arkansas, and even Mexico City and Santiago, Chile. Meanwhile, Lucinda discovered folk music (especially Joan Baez) through her mother and was galvanized into trying her own hand at singing and writing songs after hearing Dylan's Highway 61 Revisited. Immersed in a college environment, she was also exposed to '60s rock and more challenging singer/songwriters like Leonard Cohen and Joni Mitchell. She started performing folk songs publicly in New Orleans and during the family's sojourn in Mexico City. In 1969, she was ejected from high school for refusing to say the Pledge of Allegiance, and she spent a year working her way through a reading list supplied by her father before leaving home.

Williams performed around New Orleans as a folk artist who mixed covers with traditional-styled originals. In 1974, she relocated to Austin, TX, and became part of that city's burgeoning roots music scene; she later split time between Austin and Houston, and then moved to New York. A demo tape got her the chance to record for the Smithsonian's Folkways label, and she went to Jackson, MS, to lay down her first album at the Malaco studios. Ramblin' on My Mind (later retitled simply Ramblin') was released in 1979 and featured a selection of traditional blues, country, folk, and Cajun songs. Williams returned to Houston to record the follow-up, 1980's Happy Woman Blues. As her first album of original compositions, it was an important step forward, and although it was much more bound by the dictates of tradition than her genre-hopping later work, her talent was already in evidence.

However, it would be some time before that talent was fully realized. Williams flitted between Austin and Houston during the early '80s, then moved to Los Angeles in 1984, where she started to attract some major-label interest. CBS signed her to a development deal in the mid-'80s but wound up passing since neither its rock nor its country divisions knew how to market her; around the same time, a short-lived marriage to drummer Greg Sowders dissolved. Williams eventually caught on with an unlikely partner -- the British indie label Rough Trade, which was historically better known for its punk output. The simply titled Lucinda Williams was released in 1988, and although it didn't make any waves in the mainstream, it received glowing reviews from those who did hear it. With help from guitarist/co-producer Gurf Morlix, Williams' sound had evolved into a seamless blend of country, blues, folk, and rock; while it made perfect sense to roots music enthusiasts, it didn't fit into the rigid tastes of radio programmers. But it was clear that she had found her songwriting voice -- the album brimmed with confidence, and so did its assertive female characters, who seemed to answer only to their own passions.

Many critics hailed Lucinda Williams as a major statement by a major new talent. Rough Trade issued a couple of EPs that featured live performances and material from Lucinda Williams, and Patty Loveless covered "The Night's Too Long" for a Top 20 country hit. However, it would be four years before Williams completed her official follow-up. She signed with RCA for a time but left when she felt that the label was pressuring her to release material she didn't deem ready for public consumption. Instead, she went to the small Elektra-distributed label Chameleon, which finally released Sweet Old World in 1992. A folkier outing than Lucinda Williams, Sweet Old World was an unflinching meditation on death, loss, and regret. Even its upbeat moments were colored by songs like the title track and "Pineola," two stunning, heartbreaking accounts of a family friend's suicide (poet Frank Stanford, not, as many listeners assumed, Williams' own brother). Needless to say, the record won rave reviews once again, and Williams toured Australia with Rosanne Cash and Mary Chapin Carpenter.

On that tour, Carpenter decided to record "Passionate Kisses," the key track and statement of purpose from Lucinda Williams. It shot into the country Top Five in 1993 and won its writer a Grammy for Country Song of the Year. Other artists soon started mining Williams' back catalog for material: avowed fan Emmylou Harris recorded "Crescent City" on 1993's Cowgirl's Prayer and cut "Sweet Old World" for her 1995 alternative country landmark Wrecking Ball; plus, Tom Petty covered "Changed the Locks" for 1996's movie-related She's the One. As the buzz around Williams grew, so did anticipation for her next album. With Chameleon having gone under, she signed with Rick Rubin's American Recordings label and began sessions with Morlix again co-producing. Dissatisfied with the results, Williams' rigorous retouchings led to Morlix's departure from the project and her backing band. In 1995, she moved into Harris' neighborhood in Nashville and through Harris hired Steve Earle and his production partner Ray Kennedy. At first, she was so enamored with their work that she re-recorded the entire album from scratch. When it was finished, she decided that the results sounded too produced, and took the record to Los Angeles, where she enlisted Roy Bittan (onetime E Street Band keyboardist) to co-produce a series of overdub sessions that bordered on obsessive. During the long wait for the album, the media began to pay more attention to Williams; some of the coverage was fairly unflattering, painting her as a neurotic control freak, but she always countered that it was unfair to criticize the process if the results were worthwhile.

Rubin mixed the final tracks, but the album was further delayed when he entered into negotiations to sell the American label. Mercury stepped in to purchase the rights to the album, which was finally released in 1998 under the title Car Wheels on a Gravel Road. Boasting a bright, contemporary roots rock sound with strong country and blues flavors, not to mention major-label promotional power, the album won universal acclaim, making many critics' year-end Top Ten lists and winning The Village Voice's prestigious Pazz & Jop survey. It also won Williams a Grammy for Best Contemporary Folk Album (despite being the least folk-oriented record in her catalog) and became her first to go gold, proving to doubters that she was not just a songwriter, but a full-fledged recording artist in her own right. After a merger shakeup at Mercury, Williams wound up on the Universal-distributed roots imprint Lost Highway. She was the subject of an extensive, widely acclaimed profile in The New Yorker in 2000, written by Bill Buford, who was nominated for a National Magazine Award for his work; however, Williams and some of her supporters took issue with some of his more objective-minded analysis.

Williams delivered her next album, Essence, in 2001, after a relatively scant wait of just three years. An introspective collection, it often found Williams taking a simpler, more minimalistic lyrical approach and was greeted with rapturous reviews in most quarters. The track "Get Right with God" won Williams her third Grammy, this time for Best Female Rock Vocal, which further consolidated her credibility as a singer, not just a songwriter. Paring down the time between album releases even further, Williams returned in 2003 with World Without Tears, which became her highest-charting effort to date when it debuted in the Top 20. Two live recordings were released in 2005, one (Live @ the Fillmore) for Lost Highway and the other (Live from Austin, TX) for New West. West arrived in 2007, followed by Little Honey in 2008. Williams returned to the studio in 2010 with producer Don Was at the helm with help from Eric Liljestrand and husband/manager Tom Overby (the latter two co-produced Little Honey), with some of the same guests from the previous offering including Matthew Sweet and Elvis Costello, who sings and plays on almost half the record. Entitled Blessed, the album was released in early 2011 in two editions, a standard CD and as a limited deluxe version with a bonus disc which included the working demos for the songs on Blessed, recorded in Williams' kitchen. 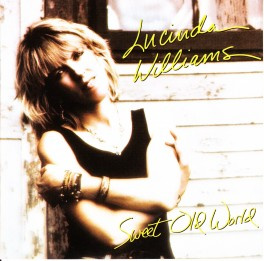 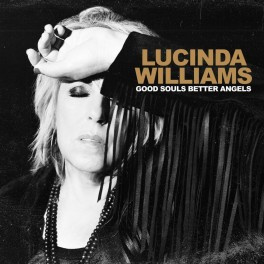