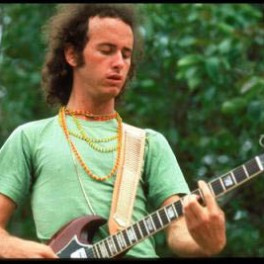 When you think of the Doors, "guitar" isn't the first thing that usually comes to mind (Jim Morrison's manic persona and Ray Manzarek's swirling organ usually take precedence), but guitarist Robby Krieger proved to be an integral member of the band -- helping pen the majority of the group's songs. Born on January 8, 1946 in Los Angeles, CA, Krieger was first taken by classical music, before discovering such early rock & roll artists as Elvis Presley via the radio. When surfing proved to be taking Krieger's mind off of studying during his teenage years, his parents enrolled him in a private school. Each night, students were forced to study in their rooms for a few hours -- instead, Krieger used this time to teach himself how to play guitar. First interested in flamenco guitar, Krieger's playing style soon expanded into folk, jazz, and blues. But it was a Chuck Berry concert that finally convinced Krieger to give rock music a go, which resulted in the guitarist trading his classical guitar in for a Gibson SG, an instrument that he would eventually become synonymous with.

Studying physics and Indian music at UCLA, Krieger played in bands with friends, and eventually bumped into a drummer he'd met a few years before, John Densmore. The two began jamming on blues together, while Krieger's interest in Indian music and culture continued to flourish, as he began dabbling with sitars (studying at the Kinnara School, which was founded by Ravi Shankar) and attending meditation classes. It was at one of these meditation classes that Krieger met keyboardist Ray Manzarek. Manzarek eventually convinced Krieger to come down and rehearse with a poet/singer he'd been working with, Jim Morrison. Their first rehearsal supposedly resulted in the penning of "Moonlight Drive," and after playing several gigs, Krieger convinced his pal Densmore to join on as well, resulting in the birth of the Doors.

Quickly building a name for themselves in L.A. with their unpredictable live shows, the Doors were signed to Elektra Records, and issued their debut album, The Doors, in 1967. The album would become one of rock's all-time classics, as it spawned the monster hit "Light My Fire," a tune penned entirely by Krieger. It appeared as though the group had a hard time following up such a strong debut, as such subsequent studio releases -- 1967's Strange Days, 1968's Waiting for the Sun, and 1969's The Soft Parade -- all included several classic songs, but failed to match the consistency of their debut. But by the dawn of the '70s, it appeared as though the band had regained its focus, issuing a pair of strong releases, 1970's Morrison Hotel and 1971's L.A. Woman, before Morrison drank himself into "the great saloon in the sky." In the wake of Morrison's passing, the Doors attempted to continue on, resulting in a pair of so-so albums, 1971's Other Voices and 1972's Full Circle, before packing it in.

Krieger would go on to sporadically issue solo albums (debuting in 1977 with Robby Krieger & Friends), in addition to playing live dates and guesting on albums by other artists (the Butts Band, Blue Öyster Cult, etc.). In the early 21st century, Krieger and Manzarek resuscitated the Doors (with the Cult's Ian Astbury taking Morrison's position, and the Police's Stewart Copeland initially taking Densmore's spot) for live shows and recordings. A meditative and jazzy solo album, Singularity, appeared in 2010. 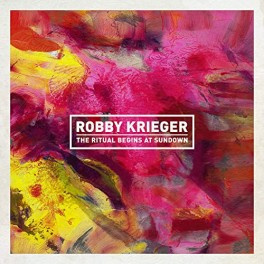 Here you can read about Robby Krieger biography and see all his / her albums, also you can download any album or song crated by Robby Krieger.